" ... Baby One More Time" is already stuck in our heads after seeing these. Butterfly clips, crimped hair, and outrageous style choices defined the '90s. But something we need to talk about is what our favorite actresses and singers were wearing on their faces. The best '90s makeup trends were widely adopted by the most beautiful, iconic celebrities of the time. 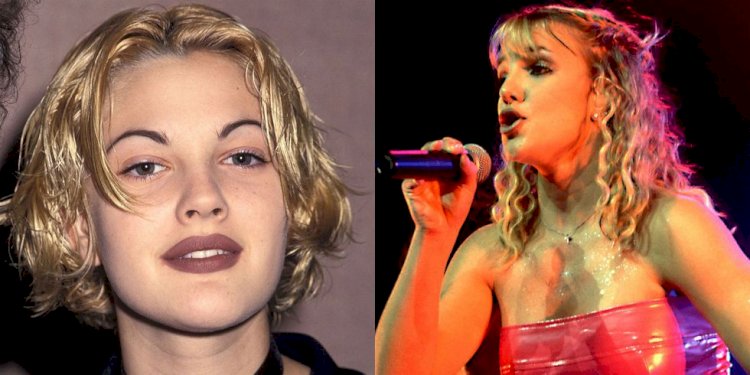 From Britney and Christina to every member of Destiny’s Child, bold eyeshadows and overdrawn lips were just a couple of the popular '90s makeup ideas. Angelina Jolie, Drew Barrymore, and Reese Witherspoon also have their fair share of epic makeup looks from back then.

And while we definitely copied them, we’re not so sure we were making the best choices with these '90s makeup looks. Before we knew about contouring and lip kits, it was all about having the glossiest lips and thinnest eyebrows possible. Our preferences and styles have certainly evolved since then, but it’s always nostalgic and fun to look back on the good ol’ days. Whether you’re preparing for a wild '90s dress-up party or want to show your kids why mom was wearing blue eyeshadow 20+ years ago, we have all the evidence you need. So, now that you’ve been warned, prepare for the most iconic makeup looks of the '90s.

Blue eyeshadow was seen on any and every celeb back then, and Angelina Jolie wasn't afraid to put it all over her lids and under her brows. Typically we focus on emphasizing one part of the face, but here, she clearly couldn't pick which she wanted to flaunt most.

Makeup wasn't just for your face in the '90s. As pop sensation Britney Spears showed us, body glitter was almost a requirement for shining as brightly as possible. After all, nothing goes with a bright pink tube top quite like gold body glitter.

The wet look made its way to the late 2010s, but we're thinking brick-brown lipstick might stay there, as one of the best '90s makeup looks. That, combined with those skinny, over-plucked brows (and the choker!) make it an iconic overall style.

RELATED: The 60 Most Embarrassing Beauty Trends of the Last 40 Years

We're quite impressed that the girl group matched from eyeshadow to toe for this red carpet look. Showing us a variety of the best '90s makeup looks, we're still talking about that glowy, opalescent eyeshadow all four of them are wearing.