Steve Martin made light of the Iowa caucus tech mishap, while best supporting actor winner Pitt nodded to the lack of witnesses at the Senate impeachment trial. 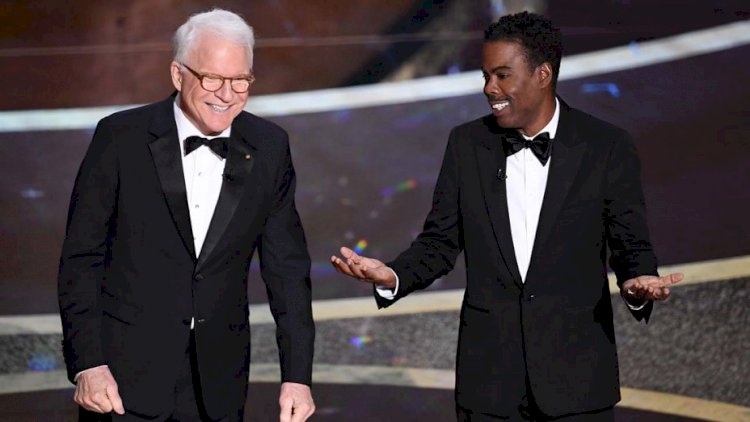 Gather hundreds of entertainment-industry types in a room and allow them speeches months before a presidential election, and discussion of politics is bound to ensue — as it did at Sunday night's Academy Awards.

Addressing the fact that the Academy had a famous best picture category mishap in 2017, Steve Martin said during his and Chris Rock's opening monologue. "They have guaranteed this will not happen this year because the Academy has switched to the new Iowa caucus app." (Martin was making light of the Democratic caucus counting mishap in the state earlier in the week.)

Rock, not much later, singled out L.A.'s homelessness crisis before Martin quickly pivoted to "Look at all the stars here!"

Brad Pitt also made a nod to U.S. politics during his acceptance speech for best supporting actor for Once Upon a Time in Hollywood. "They told me I have 45 seconds this year, which is 45 seconds more than the Senate gave John Bolton this week," Pitt said, referring to the lack of witnesses during the Senate impeachment trial of President Donald Trump.

Backstage after his speech, Pitt said of his political remark, "I was really disappointed with this week. I think the gamesmanship Trump's doing... I don’t think we should let that slide. I’m very serious about that."

During Josh Gad's introduction to Idina Menzel's performance of a song from Frozen 2, the actor nodded to international distribution for the film: "Frozen 2, or as climate change deniers call it, Not Frozen 2, has been dubbed in 45 countries around the world," he said. Speaking about voice over actors who dub movies internationally, he added, "Canadian Elsa is basically the same, but with healthcare."

During a prerecorded video about the power of documentaries later, the Academy included an excerpt of climate activist Greta Thunberg thanking a filmmaker for exposing her to the reality of climate change, which she first encountered through documentaries.

After she won in the best documentary category, American Factory co-director Julia Reichert said in her acceptance speech, "Working people have it harder and harder these days. We believe that things will get better when workers of the world unite," seemingly a call for unionization.

During his best actor speech for Joker, actor Joaquin Phoenix addressed many kinds of inequality: "I've been thinking a lot about some of the distressing issues we've been facing collectively. Sometimes we feel or are made to feel that we champion different causes, but for me I see commonality," he said. Discussion of gender inequality, racism and animal rights, among other causes, he said, stem from "the fight against injustice" and someone feeling they have the "right to dominate, control with impunity."

Phoenix then focused on his causes of environmentalism and animal rights: "I think that we've become very disconnected from the natural world, and many of us, what we're guilty of, is an egocentric worldview. We go into the natural world and plunder its resources," he said. He then said that helping to preserve the environment isn't that hard because people are "ingenious."

The remarks follow an awards season of heightened political activism from some nominees, notably animal rights activist Joaquin Phoenix, whose behind-the-scenes lobbying efforts led the Golden Globes to go all-vegan. (The Critics' Choice Awards, SAG Awards also made the switch, while the Oscar Nominees Luncheon went plant-based.) In his Golden Globes speech, Phoenix additionally called for an end to stars flying private jets to nearby events, including the Palm Springs Film Festival.

During the Golden Globes, host Ricky Gervais explicitly told the night's winners not to get political in their speeches while highlighting the economic inequality between viewers and the honorees of the ceremony with his risqué speech. "You're in no position to lecture the public about anything. You know nothing about the real world. Most of you spent less time in school than Greta Thunberg," he remarked.

The 92nd annual Academy Awards took place at the Dolby Theatre at the Hollywood & Highland Center in Hollywood and were televised live on ABC.

5 Ultimate Tips How You Can Grow Your New YouTube Channel