The eighth Democratic debate had its share of fiery exchanges and left New Hampshire up for grabs. 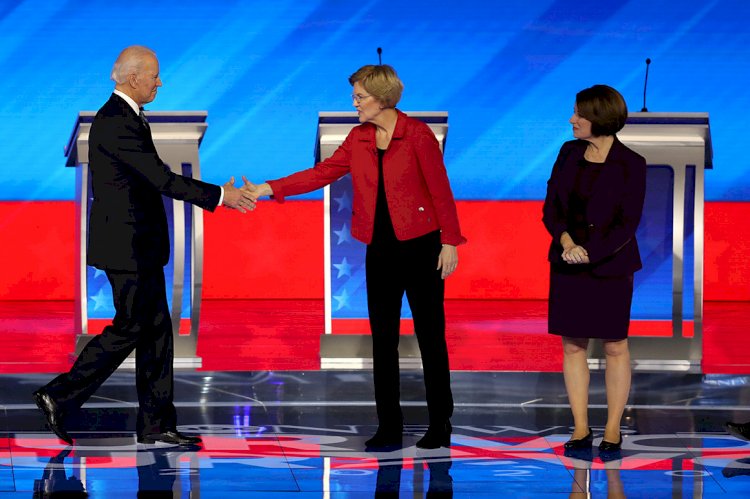 The Democratic candidates came out hot on Friday night in New Hampshire, going after each other on issues of race, experience, health care and campaign fundraising, among other things. The target for much of the night was Pete Buttigieg, the former mayor of South Bend, Ind., who posted a surprise finish in Iowa, and has taken heat for much of the week.

Amy Klobuchar was one of main aggressors throughout the night, while the billionaire Tom Steyer also sought to score points on issues like race and climate change, as he polls well in South Carolina. Joe Biden, still reeling from a disappointing finish in Iowa, struggled to find his footing at times, and even went so far as to acknowledge he doesn't expect a strong finish in New Hampshire.

Here are some of the key moments from the debate:

Biden’s backers were hopeful that a scrappy new candidate would take the stage and take it to Buttigieg and Bernie Sanders.

Instead, Biden, who finished a disappointing fourth in Iowa, all but conceded a poor showing in the coming primary.

“It's a long race. I took a hit in Iowa and I’ll probably take one here,” Biden said. “Bernie won by 20 points last time. Usually it's the neighboring senators that do well.”

Biden, eliding the fact that he once said he would win in New Hampshire and Iowa, changed his tune and said that “I’ve always viewed the first four encounters, the two caucuses and the two primaries as a starting point.”

Warren scores on Buttigieg over record on race

One of Buttigieg’s biggest weaknesses is among black voters, specifically when it comes to his record as mayor of South Bend, Ind. And it’s a record that he didn’t want to talk about when it came to an increase of marijuana arrests among African-Americans when he led the city.

“The reality is, on my watch, drug arrests in South Bend were lower than the national average, and specifically lower than in Indiana,” Buttigieg said, avoiding the question about the increase of arrests over marijuana during his term. He then spoke about opiate arrests and the crack epidemic of the 1990s.

ABC debate moderator Linsey Davis then steered the issue back to the question, noting that arrests of black people for marijuana possession went up. Buttigieg said the arrests only increased in drug cases connected to serious crimes like “gun violence and gang violence, which was slaughtering so many in our community — burying teenagers, disproportionately black teenagers.”

Davis then asked Warren if Buttigieg answered the question.

“No,” Warren said. Applause rippled through the crowd.

Buttigieg looked to parry criticism that he lacks the experience necessary to be president, conceding that “if you’re looking for the person with the most years of Washington establishment experience under their belt, you’ve got your candidate, and of course it’s not me.”

“We need a perspective right now," he added, citing his credentials as an openly gay man, a former South Bend, Ind., mayor and a veteran, "that will finally allow us to leave the politics of the past in the past, turn the page and bring change to Washington before it’s too late.”

“The politics of the past were not all that bad,” Biden shot back, going on to cycle through his accomplishments, such as the Violence Against Women Act, the $900 billion Recovery Act and his own early support for gay marriage as an elected official.

“So I don’t know what about the past of Barack Obama and Joe Biden was so bad,” Biden added.

Buttigieg conceded that “those achievements were phenomenally important because they met the moment, but now we have to meet this moment, and this moment is different.”

Seizing on that line of defense, Klobuchar recalled that “we had a moment the last few weeks, Mayor, and that moment was these impeachment hearings.”

She said she saw a lot of courage from her Senate colleagues who took tough votes.

“But what you said, Pete, as you were campaigning through Iowa as three of us were jurors in that impeachment hearing, you said it was exhausting to watch and that you wanted to turn the channel and watch cartoons,” Klobuchar said. “We have a newcomer in the White House and look where it got us. I think having some experience is a good thing.”

Dems pile on billionaires — one in particular

“I don’t think any billionaire ought to be able to do it, and I don’t think people who suck up to billionaires in order to fund their campaigns ought to do it,” Warren said. “I heard everyone here talking about as Democrats we all wanna overturn Citizens United because we wanna end this unlimited spending. Yeah, except everyone on this stage except Amy and me is either a billionaire or is receiving help from PACs that can do unlimited spending.”

Sanders called it “nonsense” that someone worth $60 billion can spend “several hundred million dollars on” advertisements to gain an advantage over other candidates. Then he drew a distinction with Buttigieg, which his team had telegraphed earlier Friday.

“Unlike some of the folks up here, I don’t have 40 billionaires, Pete, contributing to my campaign,” Sanders said. “What we do have is 6 million contributions from one-and-a-half million people averaging $18.50 a contribution. That is unprecedented in the history of American politics.”

Buttigieg reprised his argument that he’s the only candidate on stage who isn’t a millionaire or billionaire himself but added a twist.

“I know a thing or two about building a movement, because mayor of South Bend, Indiana, is not exactly an establishment fundraising powerhouse,” he said.

Will Bernie’s socialist tag hurt the party in November?

Biden argued that choosing Sanders as the Democratic nominee would be a risk, not only to winning the White House but also to winning back control of the Senate.

“With regard to Sen. Sanders, the president wants very much to stick a label on every candidate. We’re gonna not only have to win this time,” Biden said. “We have to bring along the United States Senate, and Bernie’s labeled himself — not me — a democratic socialist. I think that’s the label that the president’s gonna lay on everybody running with Bernie if he’s the nominee.”

Asked to respond, Sanders said Democrats shouldn’t be worried about nominating him “because Donald Trump lies all the time.” He argued that Trump would say “terrible things” about Biden and “ugly, disgusting things” about Warren, Klobuchar and any other candidate onstage.

ABC moderator George Stephanopoulos also asked the other candidates on stage if they were concerned about having Sanders at the top of the ticket. Sanders said, simply: "I'm not."

Fiery exchanges on health care, but no new ground

The fiery Joe Biden that his backers wanted to see showed up early in the debate, when he attacked Sanders for declining to say how much his Medicare for All bill would cost.

Biden pointed out that Vermont had trouble with government run healthcare and scrapped the idea and then questioned how Sanders could get the measure passed.

“Imagine you're going unite the country, walking into the Congress and saying, ‘I got this bill. It's going provide Medicare for everybody. I can’t tell you much it's going cost. We'll find out later,’" Biden said, adding: "Who do you think is going get that passed? I busted my neck getting Obamacare passed, getting every Democratic vote. I know how hard it is.”

Biden, who seldom gets big applause at debates, earned it this time.

Sanders said Biden was supporting the status quo of a dysfunctional system.

The impeachment of President Trump for attempting to pressure Ukraine into opening an investigation into Biden’s son continues to hang over the race. Now that Trump has been acquitted in the GOP-led Senate, Republicans want to investigate Biden.

Buttigieg, when asked if it’s a danger to nominate a candidate who’s still under investigation, he backed Biden.

“No,” Buttigieg said. “And we are not going let them change the subject. This is not about Hunter Biden or Vice President Biden or any Biden. This is about an abuse of power by the president. Look, the vice president and I and all of us are competing. But we've got draw a line here."

Biden thanked Buttigieg for the support and said the president will lie about any opponent. He then drew a parallel between the way Lt. Col. Alexander Vindman, an impeachment witness against the president, was walked out of the White House just days after Trump gave conservative talk radio host Rush Limbaugh the Presidential Medal of Freedom

Trump, Biden said, “should be pinning a medal on Vindman and not on Rush Limbaugh. I think we should all stand to give Col. Vindman a show of how much we support him. Stand up and clap for Vindman.”

A few people in the audience started to applaud.

“Get up there!” Biden said, as people rose to their feet and clapped. “That’s who we are! We are not what Trump is!”

It was only a matter of time before someone at the debate addressed the strange conspiracy about President Trump being cut from the Canadian version of ‘Home Alone 2.’ Really. This happened.

“We have a president that blames everyone in the world,” Amy Klobuchar said. “We have not talked about this enough. He blames Barack Obama for everything that goes wrong. He blames his federal reserve chair that he appointed himself. He blames the king of Denmark. Who does that? He blames the prime minster of Canada for, he claims, cutting him out of the Canadian version of ‘Home alone 2.’ Who does that? That's what Donald Trump does.”

Company management, marketing and growth: Intuition versus Method. The...