Abuse of power, not bribery or extortion, should be the foundation of the articles of impeachment if Democrats hope to persuade skeptics in the public and Congress. 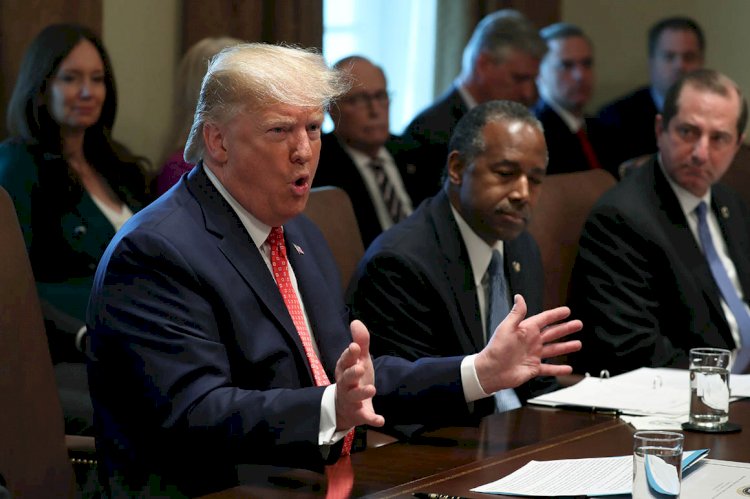 Despite testimony that overwhelmingly established an aid-for-dirt scheme directed by President Donald Trump, the impeachment inquiry has not drawn support from any Republicans or significantly shifted public opinion against Trump thus far. Indeed, there is some evidence that independent voters are fleeing. Democrats have little margin for error as they draw up articles of impeachment and should write them carefully.

The good news for Democrats is that they proved their case. There can be little dispute that Trump directed officials to withhold military aid appropriated by Congress until and unless Ukraine publicly announced investigations that would benefit Trump politically. At this point, if you don’t think the testimony established a quid pro quo involving aid to Ukraine, you weren’t paying attention.

The major challenge Democrats face is what to call this scheme, because “quid pro quo” isn’t itself an impeachable offense. Throughout the hearings, we’ve heard terms ranging from bribery to extortion to abuse of power. Democrats will need to pick charges that will pass the House and give them the best chance to move public opinion and pick up Republican votes in the Senate.

1. Stick with the simplest, true charge.

“Abuse of power” is an obvious choice because it fits Trump’s conduct. Presidents are not supposed to use our tax dollars for their own gain, and Trump had no authority to withhold aid that had been appropriated by Congress. Charging Trump with abusing his power as president speaks to what is wrongful about what he did.

It is also well established that “abuse of power” is an impeachable offense. Richard Nixon was charged with abuse of power, as was Bill Clinton, although that particular charge against Clinton failed to pass the House of Representatives. In addition, there is no question that our founders intended for impeachment to be used when presidents engaged in corrupt conduct, which is what an “abuse of power” charge is intended to capture.

2. There‘s one obstruction count, not two.

Democrats should also include an article that charges Trump with obstruction of justice. Despite the overwhelming evidence of Trump’s misconduct, there is no question that Trump prevented the House from obtaining testimony from many of the most important witnesses, including Acting White House Chief of Staff Mick Mulvaney and Secretary of State Mike Pompeo. Witnesses also testified that many important documents, including handwritten notes of key witnesses like Ambassador William Taylor, were withheld.

There are often legitimate reasons for the executive branch to withhold production of documents and witnesses, such as a proper assertion of executive privilege. But Trump had no legal reason to withhold evidence, blasting the impeachment inquiry as “illegitimate” and “unconstitutional” even though impeachment is literally written in the Constitution. By thwarting Congress’ constitutionally mandated authority, Trump literally declared himself above the law, and Democrats are justified charging him with obstructing their investigation as a result.

Democrats would be wise to go beyond Trump’s withholding of documents and evidence and include other ways in which he obstructed their investigation, including his public comments in which he lied to the public about the Ukraine scandal (like when he denied withholding aid to Ukraine) and his attempts to intimidate witnesses, such as Ambassador Marie Yovanovitch. The articles of impeachment drawn up by the House against Nixon included similar allegations.

While the obstruction article could reference the fact that Trump obstructed the investigation of former Special Counsel Robert Mueller, which is relevant to show that this is a pattern of activity by Trump, I would not formally charge that conduct. It’s impossible to explain how Trump obstructed justice without first discussing the underlying Mueller investigation. And proving those allegations would require the testimony of Trump allies like Corey Lewandowski, who defiantly thumbed his nose at House Democrats, and reluctant witness Don McGahn, who may continue to fight Democrats in court regardless of how a judge rules.

3. Bribery and extortion only sound good.

Democrats should keep the story they’re telling to the public as simple as possible and avoid playing into Trump’s argument that they are throwing the kitchen sink at him. In my experience as a former federal prosecutor and as a trial lawyer in private practice, a key to winning any trial is to tell the simple story and force the other side to tell a more complicated one.

To that end, House Democrats—including Speaker Nancy Pelosi—have begun calling Trump’s conduct “bribery.” I can see why that is an attractive label for Trump’s misconduct. The average American knows what bribery is but has never heard of “abuse of power.”

But Democrats should be careful about doing so, because while Trump’s conduct resembles bribery, as a technical legal matter it doesn’t quite fit. It’s true that demanding a thing of value in exchange for an official act (like aid to Ukraine) is solicitation of a bribe, but Trump’s allies would have a reasonable argument to make that an announcement of an investigation is not itself a “thing of value.” Similar concerns were one reason Mueller declined to charge participants in the infamous Trump Tower meeting with a campaign finance violation for seeking intangible information on Hillary Clinton.

As it stands now, Trump has no defense whatsoever on the merits to an abuse of power charge. Calling his conduct “bribery” would give Trump legal arguments like the one outlined above. Why give him a leg to stand on?

Another issue is that Trump’s conduct doesn’t fit what the average voter thinks when they hear the word “bribery.” No one slid envelopes of cash under the table to Trump. When I was federal prosecutor, I saw defense attorneys make clever use of the gap between the public perception of a crime and what the defendant actually did, and I’ve done the same thing now that I’m in private practice.

Republicans have already seized upon this technique, asking witnesses whether they were asked to bribe someone and obtaining denials. If Democrats charge Trump with bribery, you can expect Senate Republicans to elicit similar testimony and point out that no witness ever “saw Trump solicit or accept a bribe.” Technically that doesn’t matter, but it would sound persuasive to a juror or a voter.

Nonetheless, I can see why Democrats want to include an article charging bribery, given that it is a common term and one that Pelosi and Intelligence Committee Chairman Adam Schiff have used repeatedly. But I can’t see any reason to include a charge of extortion. Extortion is “the extraction of anything of value from another person by threatening or placing that person in fear of injury to any person or kidnapping of any person.” It is hard to construe Trump’s misconduct as a “threat” against Ukraine in the manner contemplated by the extortion statute.

Presidents threaten to withhold aid, send troops, or impose sanctions against foreign governments on a regular basis. We wouldn’t accuse former President George W. Bush of “extorting” Iraq, and no one would have batted an eye if Trump pressured Ukraine to purchase American goods, lower tariffs or give our military refueling rights. What makes Trump’s conduct wrongful is that he abused his office for his own political gain, not that he leveraged American power against another nation.

In practical terms, it may not matter what Democrats include in the articles of impeachment, given that Republicans appear unwilling to waver in their support of Trump despite overwhelming evidence of his misconduct. Even retiring Congressman Will Hurd, a former CIA officer and sometimes Trump critic, appears ready to vote against impeachment, although that could have something to do with the presidential run he is contemplating.

Nonetheless, House Democrats should draft the articles of impeachment carefully. New evidence could emerge, like recordings of Trump and Rudy Giuliani by indicted Ukrainian-American Lev Parnas, that could move the needle. But most importantly, the articles of impeachment drafted by the House will set a precedent that will endure. Democrats should get this one right for the history books.

How You Can Build Social Proof For Your Small Business