See some of our favorite sinister transformations here. 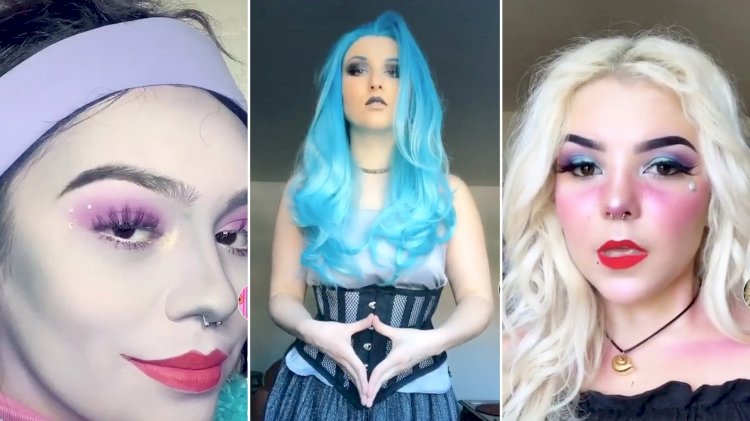 Gum wrapper nails, nostalgic 2000s-style makeovers, lash glue "lip injections" — these just a few of the brilliant beauty ideas the kids are sharing over on TikTok these days. This month, yet another has emerged in the form of a Disney-themed makeup challenge. Set to an ominous remix of Britney Spears's ...Baby One More Time, TikTokers are imagining what it'd be like if the estranged, imaginary children of Disney villains had sudden awakenings and took on the likeness of their evil predecessors. Naturally, that calls for some pretty epic makeup and hair transformations.

Cruella de Vil, Scar, Hades, Ursula, Yzma, and plenty of others have gotten the meme treatment — plus, other versions of it have popped up featuring the made-up children of Disney princesses, Marvel superheroes, and even a few Greek gods. Still, there's no doubt Disney's iconic villains make the greatest makeup material with their wild hair, colorful skin tones, and sinister dispositions.

You'll find a whole treasure trove of these drastic transformations on the TikTok app, where you can simply tap on a video's audio file to view all of the other posts ever made with it. But to make things easier, we've selected a few of our favorites below.

User @hauntedabby uses a bold upper lip, bright-blue eyebrows, and a matching wig to show what the daughter of Hades from Hercules might look like.

If Scar from The Lion King had a daughter (um, a human one), she'd probably look something like TikTok user @challxn does with her light-green contact lenses, painted-on scar, and shaggy head of curls.

Cruella de Vil of 101 Dalmatians is already pretty diabolical, but @leaveit2liz's take on her would-be daughter takes that to another level with red lipstick, a wash of green eye shadow, and a single white contact lens.

User @rejectedcheetahgirl has arguably the most dedication to this meme, as you can see from her all-purple take on Yzma from The Emporer's New Groove.

If she really existed, the daughter of Peter Pan's Captain Hook would know her way around a kohl eyeliner pencil, as evidenced by this transformation by user @sierrakai.1.

The purple smoky eye and black lipstick might all be part of @emilemb's take on Dr. Facilier of Princess and the Frog, but we might give it a go on our next night out.

Ursula from The Little Mermaid never went without her bright red lipstick — and as user @morganedjx shows, neither would her imaginary daughter, who's got exaggerated blush and iridescent highlighter for good measure, too.

Now, see how eye makeup has evolved within the past 100 years:

7 mistakes made when you want to attract and retain talent within the...