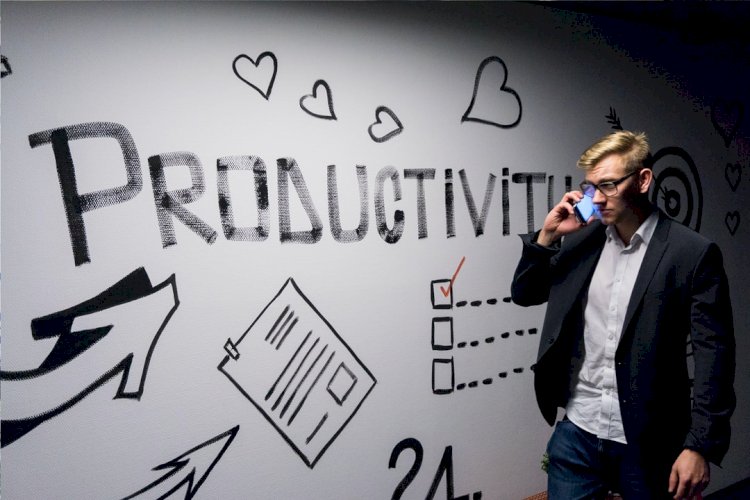 What follows are 4 common habits that interfere with productivity. Work to eliminate them and watch your natural productivity rise.

1. Working in marathons instead of sprints

One of the biggest productivity pitfalls I see people falling into is trying to work in marathons.

Let’s say you’ve got a deadline coming up for a big project. And you decide that Tuesday morning is the day you knock it out. You calculate that it’ll probably take about 6 hours of work, so you make a plan to get to work at 6:00 a.m. and clear your calendar for the day, figuring that should be plenty of time to get it done.

The problem here is that you’ve created a marathon for yourself. And in the world of productivity, marathons are bad news.

A few things are likely to happen in such a situation:

You can avoid all of these outcomes by learning to work in sprints instead of marathons.

A sprint is a time-limited burst of focused, high-energy work on a specific task.

For example, if you have six hours of work, you might divide that work up into three parts. Then design a series of 45-minute sprints to work through each part.

Working in sprints has the following benefits:

The next time you have a major project or piece of work to accomplish, ask yourself:

How could I work on this project in several sprints rather than trying to slog through it in a single marathon?

With a little planning upfront, you’ll find sprinting a far more effective and enjoyable way to work through your most challenging projects and tasks.

“The time that leads to mastery is dependent on the intensity of our focus.”

2. Coping with distractions instead of eliminating them

Everybody knows how destructive distractions can be for our productivity. From Facebook notifications and email reminders to co-worker drop-ins and incessant phone calls, distractions are seemingly constant in modern life.

We’re drowning in distractions and our productivity is paying the price.

But there’s an even bigger problem than the sheer number of distractors we all face: Our strategy for dealing with distractions is deeply flawed.

Most of us assume that we need to cope with and manage our distractions better:

But coping with distractions is itself the problem.

By adopting the coping mindset, we’re implicitly agreeing to and endorsing omnipresent distraction in our work life. And while you may successfully cope with the odd distraction here and there, it’s not enough.

You will never be truly productive if you allow yourself to be surrounded by distractions.

Nobody has enough willpower to constantly resist each and every distraction of modern life. Nobody has a boss accommodating enough to straighten our every distracting element of office life. No amount of tinkering with your phone’s notification setting will make it much less tempting a distraction.

The only way to genuinely free ourselves from distraction is to cut them off at the source.

Stop trying to cope with distractions and work like hell to eliminate them.

Of course, some distractions are inevitable and uncontrollable, but that doesn’t mean we can’t take significant steps to eliminate many of them:

If you want to drastically improve your productivity, get serious about drastically cutting out the distractions in your life. It’s that simple.

“To produce at your peak level you need to work for extended periods with full concentration on a single task free from distraction.”

3. Using fear and criticism to motivate yourself

Many of us grow up believing that we need to be hard on ourselves in order to be successful. I call this the Drill Sergeant Theory of Motivation.

We assume that we need to be our own drill sergeant — constantly barking orders and making threats — or else we’ll end up slacking off, never getting anything done, and most likely, living in a van down by the river.

And one of the worst results of this belief is a habit of negative self-talk.

Self-talk is the way we talk to ourselves in our head. And negative self-talk is when that way of talking has become distorted and unrealistically negative and harsh.

People with a habit of negative self-talk frequently say things to themselves like:

We get in the habit of saying awful, hurtful, and obviously irrational things like this to ourselves because of this core belief so many of us are raised with: I must be hard on myself to be successful.

Well, let me share a little secret with you:

People are successful despite their negative self-talk, not because of it.

In years of working with high-achievers and very successful people in my work as a therapist, I have never once seen someone’s levels of achievement and productivity decrease after easing up on themselves.

Of course, they’re all terrified to try it at first. They’re mortified that they’ll “lose their edge” the minute they stop trying to motivate themselves with brutal self-talk.

But guess what…? It never happens.

If anything, people usually end up even more productive when they stop beating themselves up internally. And the reason should be obvious: All that energy being poured into “motivating” yourself with negative self-talk can now be diverted to doing new and better work.

Plus, your mood improves quite a bit when you cut out a habit of negative self-talk. And an improved mood and energy levels not only make us feel happier but usually leads to more productivity as well.

So try a little experiment: Ease up on yourself just a little and see what happens. If you really do start turning into a slacker and deadbeat without your negative self-talk, you can always go back to it.

But I think you’ll find quite the opposite: You’ll be more productive with less stress and a better mood.

“Self-acceptance is my refusal to be in an adversarial relationship with myself.”

4. Doing other people’s work instead of your own

At the end of the day, you can implement all the best productivity hacks and strategies flawlessly, but you’re still going to struggle to be productive if you’re working on things that don’t really matter to you.

There’s a limit to how much motivation we feel when we’re externally motivated:

But ultimately, it’s essential to acknowledge that…

Only intrinsic motivation can make us truly productive in the long run.

It’s only when we’re working on things that truly matter to us in a deep way that we can be fully engaged and working at close to our potential over the long-term.

This should be sobering.

The implication is that no amount of technique or strategy will get you past a certain threshold of productivity. No amount of willpower, discipline, or positive affirmations is going to get you to peak performance.

In a sense, no amount of internal change will help you produce at the highest level.

If you want to be truly productive, you must make the hard choices required to do the work that really matters.

Look, you’re not obligated to strive for peak productivity. In fact, many people probably shouldn’t. There’s a lot to be said for trading some productivity for things like less stress, more free time, etc.

If you want to achieve your potential, you won’t get there doing other people’s work.

You must find the courage to do the work that matters to you. Only then, will you be harnessing your true potential and working at or near your full capacity.

“Once you give yourself permission to stop trying to do it all, to stop saying yes to everyone, you can make your highest contribution towards the things that really matter.”

All You Need to Know

Becoming more focused and productive is about what you do less of, not more of. Here are four good places to start:

Work in sprints, not marathons.

Eliminate distractions instead of coping with them.

Stop using fear as a motivator.

Do the work that really matters.

The Best Eye Shadow Palettes, According to Allure Editors

7 mistakes made when you want to attract and retain talent within the...